In Wonderland all is magical. You know that you have well and truly fallen down the rabbit hole,when Christmas occurs during the summer. In 2013,Mr. Bill and I celebrated a very merry Kiwi Christmas. We were curious as the yuletide approached,how would the gentlefolk of Ohope and Whakatane celebrate Christmas?

Mr. Bill and I were  delighted,as we experienced each ‘new’ sight and sound of the season. Would the newspaper report how many shopping days remained until Christmas, under it’s banner? No. However, Nigel, our local butcher, (Seriously,how classy is it,to have a butcher named Nigel?)posted a colorful sign that counted down the days, to order your holiday ham. Would there be lights ? Yes. Soon white fairy lights  appeared in the trees. Would there be outdoor decorations? Yes. Driftwood Christmas trees adorned decks and lampposts were festooned with festive banners,with each Bay of Plenty town,hanging their own design. Would there be holiday parties? Yes & No. Oops! We inadvertently crashed the Christmas Savings Club party at New World. Ah,truth be told, all were welcome at the grocery store’s giant block party. There was music,food,prizes and double fly by points!  As the clerks rang the sales,even the cash registers sang a merry tune. We wondered if the Kiwis,would sing the same beloved Christmas carols?  YES! During Advent, we added our voices to our neighbors, at the Community Carol Sing Along. It was heavenly to sit on the grassy hillside above the Whakatane River,on a balmy  summer evening, singing Christmas carols. You sure can’t do that in the frozen north!

What about a tree? When I asked Mr. Bill,where we might find a Christmas tree,the wiseman in this Nativity story sagely replied, that he’d ask the theater nurses. The answer was worrisome. Mr. Bill was told,”my husband just goes out into the bush and cuts one down.” Oh Lord, there were so many ways, that scenario could end badly. Yet,we simply had to have a tree. Our daughter, Audry, was coming for Christmas! Since we were leaving on Boxing Day,to tour The Coromandel,we decided we would buy an artificial tree and some lights at The Warehouse. Rather than trying to recreate a chilly  yuletide, Mr. Bill & I  decided to embrace the bach and planned a beach Christmas for our youngest. Ever mindful of Mr. Bill’s wallet,I decided to thread ribbons through seashells to make ornaments for our tree. Following a storm, Mother Nature lent a hand to Necessity, the Mother of Invention and deposited heaps of shells on the beach, just in time for Christmas.The workshop was bustling, now all we needed was a tree.

Enter not one but two secret squirrels!  Linda and Rose. Upon hearing all the commotion, my friends appeared like the Magi bearing gifts and saved Christmas. Linda lent a pre lit tree, decorations galore, and ornaments. Rose’s Santa Sack was bursting at the seams with ornaments as well and had something very special at the bottom.

Oh my stars, what a treasure trove! There were ribbons and bows, ropes of garland, ornaments in a variety of shapes and sizes- some were shiny bright, others had a lustrous glow and yet more were painted in cheery seasonal colors. There was even an angel for the tree top. Before you could say, “Ho, Ho, Ho,” my tree had bling! It was ‘beginning to look a lot like Christmas’ What did Mr. Bill like best of all? That it was all free! Merry Christmas, indeed.

There was a wondrous surprise in Rose’s bundle of decorations;nestled at the bottom of the bag,was a small white package. I carefully unwound skeins of cotton wool,to reveal the greatest gift of all. Tears pricked my eyes as I uncovered the figures of the Holy Family.The Nativity  Creche was always the centerpiece in my family’s home at Christmas and Roses’s figurines were exactly like my grandmother’s. Holding these dear little statues made of clay, Christmas memories filled my heart with joy. I felt connected through time and distance to all my loved ones. Carefully cradling the figures of Baby Jesus, Mary and Joseph, I was filled with gratitude and love for my kind,thoughtful friends. Now it felt like Christmas.

It was a very merry Kiwi Christmas that year. I was reminded,that Christmas is the same the world over. Seasons and celebrations may be different but the message of the Christ Child is the same, “Peace and Good will to all.”

Meri Kirihimete and to all a good night. 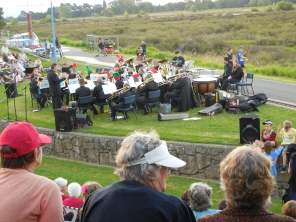 and the band plays on 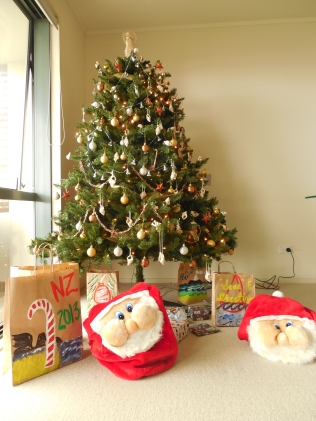 Santa sacks instead of stockings!

Like Loading...
This entry was posted in Uncategorized and tagged Adventures in New Zealand, Christmas, New World, New Zealand. Bookmark the permalink.

4 Responses to A Kiwi Christmas