Of Legends and Fixtures

“You’re a bit of a legend around here”, the woman remarked, as Mr. Bill slowed his pace, allowing her to cross the footpath in front of him. That Mr. Bill could reduce his speed is most impressive, for he’s a determined jogger, not a sprinter. In fact, Mr. Bill’s running style, has been the subject of much discussion in our small town, for all is observed, noted and remarked upon in Ohope. Had they known, that Mr. Bill was a native Nutmegger, a Connecticut Yankee from the ‘Land of Steady Habits’, his  dogged determination would have explained all .

When Mr. Bill  first took to the streets for his evening run, strangers who are now friends, showered him with encouragement. The first was Greg , the keen cyclist, who flies on his gearless bike. He would shout out,”rock and roll” and flash Mr. Bill an encouraging thumbs up, as he sped by. Then there was the older gentleman, who lives down West End Road, who would wave, calling out “Hello Rocky”, when Mr. Bill ran past.

However, the first inkling Mr. Bill had, that the locals were mystified by his  measured running gait, was when a woman called out to him to “stop”, as he passed by her in town. The stranger had a  burning question for the strange jogger. “My friends and I want to know, what are  you in training for?”, she queried, while Mr. Bill, not wishing to stop, ran in place, (rather more like shuffling, from foot to foot). Mr. Bill politely answered, that he was “just running and not training for anything”. The stranger burst out laughing and exclaimed,”Oh, you’re an American, that explains it”!  Explains what? Mr. Bill wondered, as he continued on his way. Mr. Bill reported this strange encounter to me, when he finished his run and try as we might, neither of us could figure out why someone would think he was in training.

I received the second inquiry about Mr. Bill’s ‘training sessions’ from Paul, our local Fisher and Paykel repairman, who  asked me what was my husband was in training for and he seemed truly relieved, when I explained that, he wasn’t in training for anything; he was just running. He nodded in understanding and added, “don’t take this the wrong way, my mates and I watch him running every night and he hasn’t gotten any faster. We thought he was in training. Well, good on him for running”.  That evening, I repeated the latest training question to Mr. Bill. We shook our heads, still in the dark, as to why people would think he was in training. Meanwhile, I did notice a ‘training question effect’, there was a new spring in Mr. Bill’s step as he picked up the pace- a wee bit.

Time passed and the running man continued on, none the wiser, until my friend Bazz, enlightened me, as to why so many people assumed, that Mr. Bill was in training.  When Bazz  inevitably asked me THE question, I answered by asking him, “why does everyone think my husband is in training”?  Bazz replied in pantomime, with a perfect imitation of Mr. Bill’s jog-head tilted slightly downward, arms bent at the elbow, raised chest high, with fists clenched, rhythmically swinging back and forth across his chest- one, two, one two, jab, jab- just like a boxer!  Hilarious!  Mystery solved. Well, no wonder there was cause for concern among the kind folks of Ohope, this was one heck of a comeback ‘kid’. Now that they are used to his style of running, they would nod in agreement with his colleague, Simon,who has remarked “to see you sprinting (drum roll please) along Pohutokawa Avenue tells us all it is winter time again”.

Lest you think that Mr. Bill is the only one with a following, my biking has not gone unnoticed in our small community. I ride a sweet granny bike with a comfort seat, shopping  basket and high handle bars,that allow me to ride upright instead of hunched over, which is ever so much kinder on my back. My boy Bazz, does a spot on imitation of me as well. Bazz holds his arms out straight and makes zoom zoom,noises. He claims that it looks, like I’m riding a chopper and calls me ‘Easy Rider’. My friend Kathy has said, “Now don’t take this the wrong way, (always worrisome when someone prefaces their observations, with those words) but you look like the witch in the Wizard of Oz riding her bike through the tornado”. Hmmm, there was also something else added ,about expecting Toto to be my basket and my all black attire, which is topped off with a black peaked cap complete with a neck sun flap, sticking out from under my bike helmet. To that I say,” safety first”! I take sun protection seriously and cycle covered from head to toe. Oh dear, the black which I thought so slimming, is instead bewitching! However, it might be time to introduce a little color into my wardrobe.

So, Mr. Bill gets to be a legend, whereas I am called a fixture but only in the nicest possible way. My friend Raewyn, has told me that my daily  bike ride, has made me a fixture in town and that I’m now part of the fabric of Ohope. To belong, to feel at ease in a new place, surely that is the sweetest complement to give a transplant. Being embraced by the gentle souls of Ohope, has brought home to us, the meaning of Connecticut’s motto – Qui Transtulit Sustinet- which is latin for, “He who is transplanted still sustains”. If only I could remember my high school latin, I would add ‘thrives’.

Be you a legend or a fixture, may you be more than sustained, wherever your journey leads you. 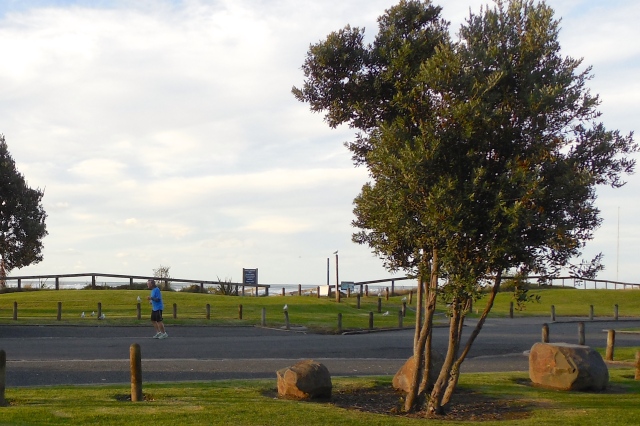 Cooling down, the best part of a good run. 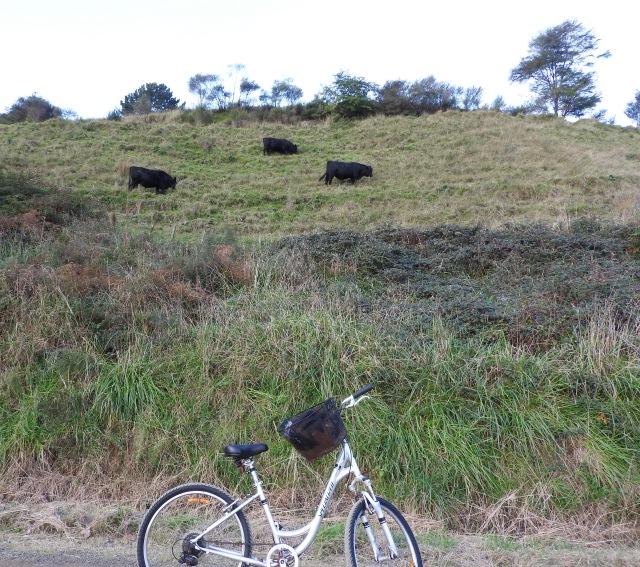 Like Loading...
This entry was posted in Uncategorized and tagged biking, exercise, jogging, travel. Bookmark the permalink.

3 Responses to Of Legends and Fixtures