It is sheer delight to come upon a bride and groom in my travels with Mr. Bill. Love is in the air and we stop to stare. In fact, I’d say it’s the only time, that it is not impolite to stare. Happiness is contagious. Everyone smiles, sharing the happy couple’s joy. Strangers beam at one another and hopeless romantics snap pictures, wishing to capture some of the day’s magic.

For many newly weds, the world is their oyster, when choosing where to exchange their vows. What would The Bard say about that? Probably, that all the world is their stage. Destination weddings promise exotic locations, in which to tie the knot, stunning backgrounds for a couple’s wedding album and even wedding crashers. Tourists happily play the role of  “dearly beloved gathered together”, when a bride and groom suddenly appear like celebrities for a photo shoot, with their stylist and photographer in tow and begin posing like professionals. I can’t help but wonder how many wedding pictures have been photo bombed, by enthusiastic extras.

Recently, while watching a bride’s train being spread out on the Circular Quay, on Sydney Harbor, I begin to fret. I worried that the beautiful gown would be soiled on the dirty pavement. Angels might fear to tread on a bride’s big day but the sea gulls had no qualms about leaving a little mess behind. I tapped Mr. Bill, who was lost in thought and expressed my wardrobe concerns. He assessed the situation and pronounced that it wasn’t their wedding day, because there weren’t any guests or an accompanying bridal party. That sorted, he returned to thinking about something interesting, like gall bladders.  Well that’s alright then, I thought reassured. Unfortunately, my relief was short lived. Soon I had a new niggle. I nudged Mr. Bill once again interrupting his thoughts, to ask if it was before or after the ceremony. This time, it took a bit longer to break into Mr. Bill’s revelry. I persisted, patiently explaining that if it was pre-ceremony, than the groom would have seen the bride before the wedding. Now Mr. Bill doesn’t sweat the small stuff, he sees the big picture but he obligingly mulled it over and declared with authority, “it’s after”. Well that was good news to me, for it meant the bridal gown was pristene for the nuptials and I could stop obsessing over it. Mr. Bill always knows the right answer, especially when I ask him, “Does this make me look fat?”.  However before long, another bothersome thought presented itself and I wondered aloud, who brings a stylist and a photographer on their honeymoon? When I troubled Mr. Bill yet again, I did not get an answer. He had moved on-literally. As I hurried to catch up, I realized that at the end of the day, it doesn’t matter where or when the photographs are taken; what matters is having a keepsake to treasure. Many moons ago, Mr. Bill and I did not have to search for the picture perfect venue for our wedding photos, for us there was no place like home.

Immigration New Zealand has a copy of Mr. Bill’s and my wedding picture on file. Americans can visit New Zealand for up to three months as tourists but in order to work or stay longer, you need a visa. Mr. Bill is granted a work visa and in order to accompany him, I have to prove that we are married and in a committed relationship. I have never  minded the stringent requirements, it’s comforting to know that New Zealand has my back. Mr. Bill is only allowed to bring  me along – no substitutes allowed.  Imagine my shock  and horror, when I  saw the headline “Migrant who had 3 partners can stay” splashed across the front page of The New Zealand Herald, on Tuesday, April 24th. The article stated, “A migrant who had three partners in New Zealand that were pregnant to him at the same time has been allowed to stay in the country”. Somebody has been a naughty boy. Lying to your case worker is a serious offense.

In order to satisfy our immigration case worker that we are truly married, we have had to submit a copy of  our marriage certificate and bank statements, documenting our financial co-dependance. In addition, Mr. Bill has to sign an affidavit, that he will support me while in New Zealand. On my application, I tick the box “no” to the question, Are you planning on giving birth while in New Zealand? I also must acknowledge that, should I give birth while in New Zealand, I am responsible for the medical bills of the little miracle. The final requirement, is to include a written narrative of our marriage, complete with photos, demonstrating our life spent together. As I thought how best to tell the story of our marriage, I remembered the Chinese proverb that one picture is worth as thousand words. For their consideration, I submitted two photographs and a long story became a short story. The first picture was taken on our wedding day  and the second was taken some years laters, showing how we had grown to look alike, like all happily married couples do! 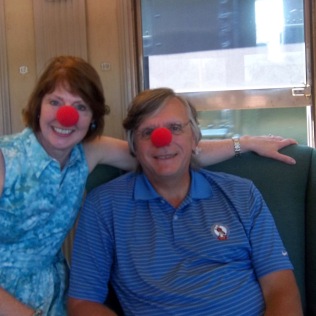 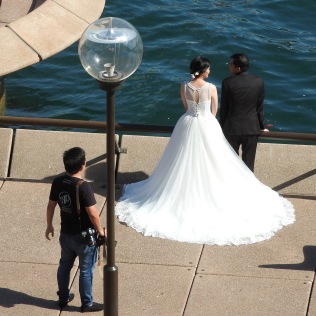 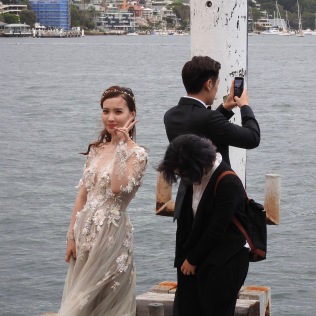 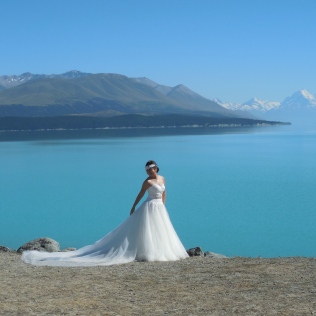 Church of the Good Shepard-Lake Tekapo

even a groom in Sydney!

20 Responses to Here Come the Brides