The Case of the Poisoned Pine 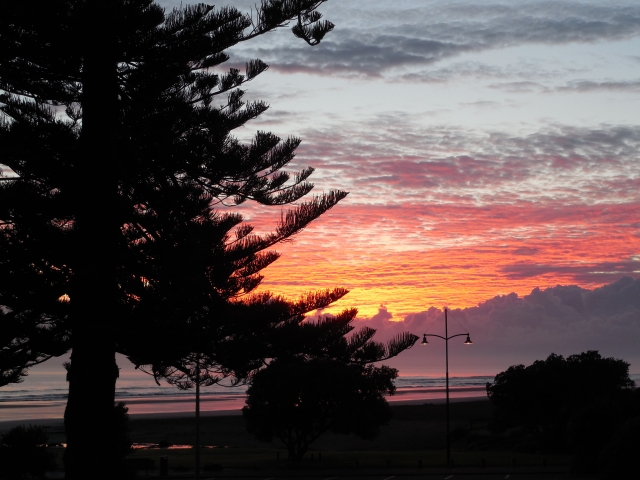 Was the Norfolk Pine really poisoned in the dead of night? Alas, ’tis true, The Pride of Beachpoint is no more, killed while the residents slept, unaware that their pine was in mortal peril. The pounding surf muffled the sound of the crime and the murderer made a clean getaway, never to be found. Who would do such a dastardly deed? Nobody knows but neighbor Joan, says that there are forty two suspects. Better ring the Hardy Boys as well.

Mr. Bill and I were shocked when we returned to Ohope, after a four month absence, to discover the massive Norfolk Pine, dead as a door nail; it’s once thick green boughs, now brown and brittle. No longer a thing of beauty to delight the eye, it was a pitiful eyesore. An investigation had ensued and five bore holes, into which the poison had been administered, were discovered around the base of the tree. Experts had been consulted and the prognosis was grim. The damage was irreversible, the tree was slowly dying. There was no saving the long standing sentinel of West End Road; it was deemed a hazard and slated for removal.

Before long, notice was given that the pine tree would be removed at 8:30am, the following day. Traffic cones were set out the night before and residents were advised to shut their windows and doors, against the anticipated dust and debris. In an especially nice Kiwi touch, we were advised not to hang our laundry out to dry.

What a morning. The tree monkeys arrived bright and early at 7:30 am and work was well underway before 8 o’clock. Mr. Bill leaves for Whakatane Hospital promptly at 7:45 and always waves as he drives away. On removal morning when I stepped out onto the balcony in my bathrobe, to wave goodbye to Mr. Bill, I was also able to wave hello to the work crew. Our neighbors, Rae and Don were already out on their balcony, coffee mugs in hand, watching the workers and they too farewelled Mr. Bill.

Ah, surely there is nothing more satisfying than watching someone else work. I poured myself a cup of Joe and settled in to watch the men tackle the mighty tree. It all went like clock work. One tree monkey scaled the tree, cutting off limbs, tossing them to the workers below, who then fed them into woodchopper. Meanwhile, out on West End Road, the Stop and Go Man kept the traffic moving, as a small crowd gathered by the beach to watch the show. As the branches were loped off one by one, our vista slowly expanded, until for the first time, we could see White Island from the lounge.

Taking advantage of a lull in the action, I grabbed my camera and dashed outside to document the process from different angles. Asking permission, I ducked under the ropes to snap a picture. Imagine my delight when I was mistaken for the press, whom they were expecting to cover the story. While I admitted that I wasn’t from the newspaper, I did say that I wrote a blog and the story would (thanks to you Dear Readers) go around the world. To that,the arborist and owner, Mr. Andersen, said, “lets do it properly then” and posed in front of his truck. He explained to me how the tree had been poisoned, showing me the bore holes at the base of the tree. I had scoop of a lifetime! Work resumed, the lower and middle sections of the pine were shorn of their limbs and it was now time, to lop off the top of the tree. With a crack and a whoosh, the crown was cut and it crashed to the ground. Now the team set to work on the remaining trunk, neatly dropping it unto a cradle, made from the severed branches. The ground crew mobilized, sawing the felled trunk into manageable sections and loaded them onto a dump truck for removal. Mr. Bill was sorry to miss the tree being felled. He was delighted, however, to return home just in time, to watch the bossman manhandle the outsized sections with his small digger, popping wheelies as he stacked and loaded the dump truck. It wasn’t until after the tree was reduced to logs and carted away, that the reporter from The Beacon finally arrived- “a day late and a dollar short”, as they say.  All that was left to photograph was a tree stump.

We lived in the shadow of the condemned pine for it’s final days, mourning it’s impending loss yet wondering how it’s absence would alter our view. Now the stately tree is only a memory but my oh my, Mr. Bill, what a view!

The Norfolk Pine in happy days 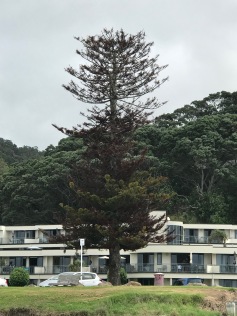 Dying from the top down

Here’s where the poison went

Cutting away the limbs from the bottom up 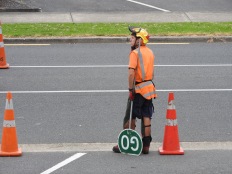 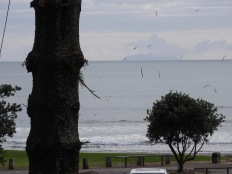 We can see White Island!

You only need protection on the front 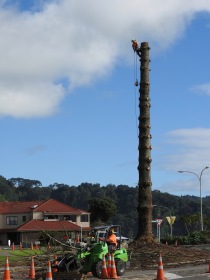 Would make a good totem pole. 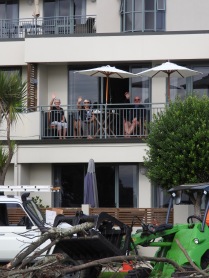 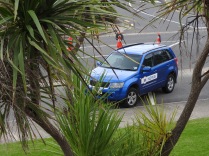 The press arrives too late 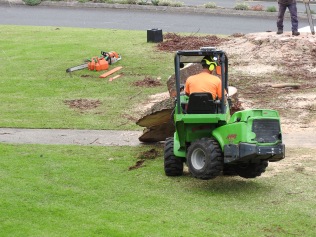 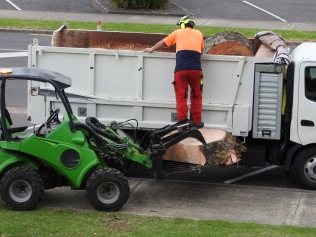 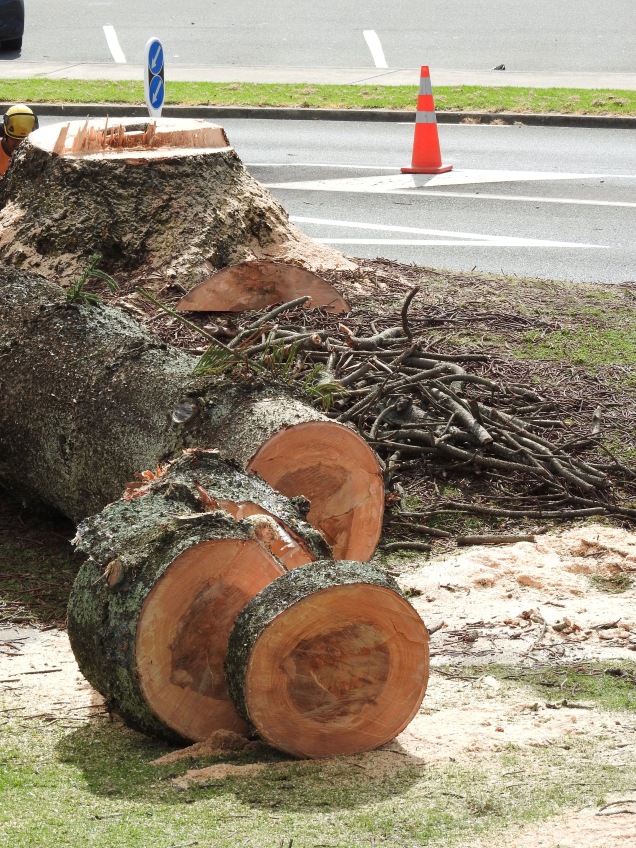 11 Responses to The Case of the Poisoned Pine