A few weeks ago, Mr. Bill passed along the public service announcement broadcast on, One Double X, our local radio station. The stairs to Otarawaiere Bay, would be closed the following morning for repairs. “Oh no, Mr. Bill”, I moaned in disbelief, “I love that hike over the cliffs to the bay. I’d better hustle tomorrow morning and get there early for a climb, just in case the stairs are closed for the rest of the winter”.

Too late! The stairs were already cordoned off, by the time the laundry was washed and hung out to dry.

Just in Time!  The helicopter sent to ferry the lumber was landing on the beach. Disappointment gave way to delight, as I enjoyed the free air show.

Now Early!  The stairs were only closed for an hour. 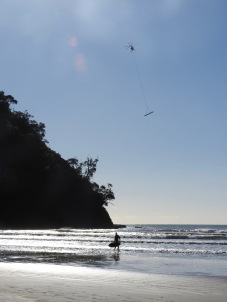 Surfers rode the waves beneath the helicopter’s flight path and a little dog with big dreams, chased the flying machine. I stood watching and recalled the first time that I climbed the stairway to heaven…

The Stairway to Heaven

Tucked behind a shielding pohutukawa tree on West End Beach, which marks the beginning of Ohope Beach, you will find a steep staircase cut into the hillside. Hidden from casual view, these steps twist and turn, as they ascend the cliffs that separate the beach from Otarawairere Bay.

If you climb these stairs, you will become a tramper on the extensive sixteen-kilometer, Nga Tapuwae o Toi (in the footsteps of Toi) Track, that connects the towns of Whakatane and Ohope Beach.

One sunny afternoon, I walked to the very end of the beach and found the secret stairs that Mr. Bill had spied on his run. Fueled by curiosity, I jumped the stream, that flowed down from the bush, to the path leading to the stairs. It was time to go exploring but I was soon disappointed. Nailed to the balustrade was an official notice, stating that the trail was closed due to extreme fire hazard. However, the restraining rope, that had been across the stairs, had been cut and was fluttering, tantalizingly, in the breeze.

A jolly white haired elderly gentleman, with a broad smile, was descending the last flight of the multi tiered staircase. I stopped him and inquired, if it was all right to use the trail. “Yes, yes, it’s open”, he assured me adding, “there’s a great view at the end!” Feeling reassured, up I went.

At the first landing, a giant Pohutukawa tree envelopes a platform built into the outcropping of rock, that juts out above the beach. This creates a windbreak muffling the sound of the surf below.The stairs continue up, as they make the first of many turns following the contours of the cliffs, to the top of the headland. Stepping aside to allow a cheery father and son to pass, I again nervously inquired, if it was indeed permissible to use the track. “Yes, yes!”, answered the dad, who was about forty, as he and his young son, grinned from ear to ear; adding that, although it was a long hike, there was a great view at the end. I thanked them and decided, that as I had the time, I would climb.

A narrow dirt path cut into the hillside, begins where the stairs end. It is above the tree line but well below the cliff top. Since there were no hand rails or guide ropes, I found it best not to look down, over the tops of the pohutukawa trees and giant tree ferns, to the sea below. I have decided that I am NOT afraid of heights but I am afraid of EDGES. It was a relief when the path ended at another set of stairs ( with handrails), which led to the summit. Ohope Beach was far, far below. The Bay of Plenty was laid out before me, dazzling and breathtaking. We live in the center of the immense Bay of Plenty, which stretches west to east, from the Coromandel Peninsula to Cape Runaway; encompassing  259 kilometers of open coastline. I could see as far as the distant ranges of the East Cape, which form the bay’s eastern boundary. On the horizon, puffing serenely (a safe 50 km away)  was White Island, an active marine volcano.

This was indeed a great view as promised but wait, there was more to discover! The trail turned away from the headland, beginning a roller coaster descent- up and down- through the bush to Otarawairere Cove. The path followed the snub nosed cliffs, with steep switch backs carved into the hillside, giving way to one last set of narrow twisting steps and ending in a path to the beach, through tall toi toi grasses.

Stepping onto the secluded shell beach, I stopped dead in my tracks. As promised, there was the great view; a naked couple disporting themselves on the sand. Oh my! Now, I understood why all the males were smiling.

Not wishing to intrude, I turned around and headed back the way I came. I recognized the pretty fair haired girl and her boyfriend; I had taken their picture for them the previous day. Retracing my steps, the slogan from the 1960’s Lady Clairol advertisement for hair dye, popped into my head. It posed the question, “Is it true blondes have more fun”?

The answer is YES! 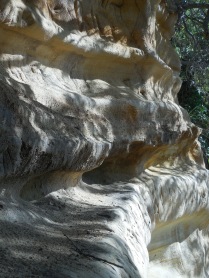 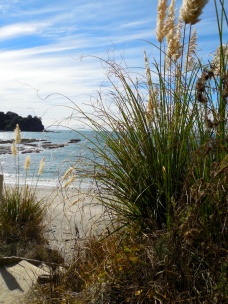 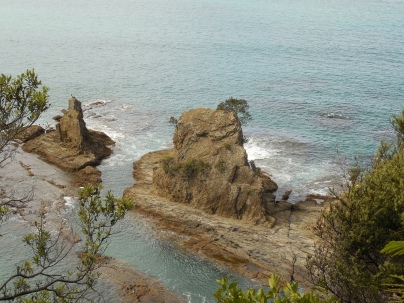 2 Responses to Stairway to Heaven