Ode to a Little Blue Penguin

‘Tis time for a sad story about a little blue penguin. Like a sad song that needs to be sung every now and then, a sorry tale needs telling, even in a travel blog; for as all travellers know, not all journeys end well. Although I have delayed writing about the demise of the little blue penguin, I shared my gruesome discovery with Mr. Bill, the moment he walked through the door, on that dreadful fall day.

One overcast April morning, West End Beach was awash with shells and driftwood, offering good pickings for a beachcomber. Walking along the shore with one eye on the threatening skies, I scanned the flotsam and jetsam that had washed ashore, after the previous night’s wild thunderstorms. Visibility was limited, both Whale Island and White Island were shrouded in mist, turning the beach into an intimate space. The low clouds muted the sound of the surf and the shore birds were unusually quiet, on that grey autumn morning.

Spying a colony of seagulls with bowed heads, gathered around a white lump, I approached them cautiously, curious to see what was on offer for their mid morning tea break. Usually these rats of the sea, will squawk and fly at anyone disturbing their meal but not this time. They sheepishly looked up and shuffled off a discrete distance, shamefaced and silent. As the feathered crowd departed, the white mound was revealed to be the tiny belly, of a Korora, a little blue penguin. The smallest and shyest of the penguin family, was lying lifeless and exposed on the beach. It’s empty eye socket was crusty with sand. Had the Sandman sprinkled it generously for eternal sleep or had the gulls been nibbling? I tossed a look of reproach at the flock who were lingering at the water line and they had the decency to look embarrassed. Standing over the wee creature, I wanted to do something to mark it’s passing but what? What would be an appropriate tribute? A eulogy? No, not quite right. Yet I found that I couldn’t leave without marking the penguin’s lonely death. It might seem macabre but as a tribute, I took a picture- a momento mori, in the tradition of Victorian postmortem photographs. That seemed fitting. After shooting several frames, I continued on my way and the seagulls returned to their shore dinner.

Mr. Bill shared my grief over the loss of the little blue penguin and was equally puzzled by the odd sighting on the beach, which we assumed must be a ‘one off’ event. Sadly it was not. It was a one in a twenty year occurance. Hundreds of little blue penguins were washing up on northern beaches. Necropsies performed on the penguins, determined that they were staving when they died. Listening to the news on Radio One Double XX, we gasped when the DJ reported that fifty, yes FIFTY , dead penguins were discovered on one eastern Bay of Plenty beach. If I was distraught over discovering one, how could I bear to see fifty? It would just break my heart. It’s now estimated that thousands of these petite penguins have starved this year, as a result of a marine heatwave in the Tasman Sea and the Hauraki Gulf. A rise in sea temperatures, caused by several ex-tropical cyclones and the La Nina weather system prevented them from feeding themselves, as they headed into their molting season. Turbid seas created by the summer storms reduced visibility for the penguins, who hunt with their eyes , which in turn rendered them unable to feed themselves. The warmer surface also pushed the cooler water deeper, taking much of their food supply beyond their diving range. Unfortunately, that meant many little blue penguins entered their molting season without the sufficient fat reserves needed to survive the two to three weeks in their underground burrows, when they were unable to hunt.

When presented with the postmortem portrait, Mr. Bill  was not alarmed by the subject matter and he solemnly examined the picture. He was shocked however, the first time that I shared one with him. In fairness to Mr. Bill, it is an unusual genre. Poor Mr. Bill, was dutifully perusing my landscape photos one time, when he demanded, “Is this rabbit DEAD”!  “Um, yes, why do you ask”?  His eyes grew wide. He was clearly worried about the new direction of my photography, until I calmly explained to him, that it was a great reference photo. There was a beautiful rabbit, lying ever so peacefully on the grass, like it had just stretched out for a nap. When would I get such a fantastic opportunity again? Rabbits won’t pose! I patiently explained, that there was a long history of rendering dead humans and animals in art. What could be a more appropriate in a still life painting, than a brace of pheasants? I assured him that I wasn’t embarking on a series of very still lives but a good reference photo doesn’t come along everyday. Still, I could appreciate his misgivings and with that in mind, I almost passed on photographing a dead gull, fearing that I was becoming a tad morbid. However, after cycling past the bird for three days and it was lying as fresh and undisturbed as on my first viewing, I was compelled to take it’s picture. It was lucky that I did, for it rained the following day and the next time I passed it’s resting place, there were only feathers. The fish skeleton and baby hammerhead shark both demanded a photo op and the gnawed shank (feral goat or wild boar?) was a rare find. I immediately stopped and snapped – no bones about it!

This was the sad story that needed telling with prose, poetry and pictures. We found that the fate of one little blue penguin, as common as a sparrow to Kiwis but rare to us Americans, haunts us still.

“Ode to A Little Blue Penguin”

Carried to shore on the incoming tide,

Mourners gathered around with time to bide,

seagulls farewell the bird who could not fly.

In lieu of flowers, clamshells form a wreath,

a message of bereavement on the beach.

A moment of silence for the deceased,

the gulls are quiet in their collective grief.

Heads bowed, feet shuffle, there will be no speech. 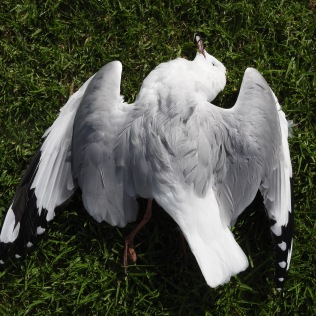 4 Responses to Ode to a Little Blue Penguin