There they were, scores of stingrays, hiding in plain sight, riding the face of the incoming wave. What I missed, Mr. Bill would have spotted. Briefly visible, before dropping into the tube, to ride the barrel wave- the penultamite run for all surfers- the stingrays were gliding elegantly on the incoming tide, arriving en masse for the “All You Can Eat Crab Buffet”, served daily at low tide.

Unfortunately, I missed them but fortunately, the camera lens did not. Intent on trying to capture the translucent green of the breaking waves, I was oblivious to the drama occurring beneath the surface. If only Mr. Bill was walking West End Beach with me that day, his keen eye, accustomed to always looking deeper, would have quickly determined what lay beneath and diagnosed stingrays. I would have been ecstatic. Instead, left to my own devices, the artist in me concentrated on the dazzling play of light and color, growing increasingly frustrated, every time a shadow ruined the shot. However, Mr. Bill, whose clinical assessment is always on, far from becoming frustrated, would have been analyzing and searching for the underlining cause. I observe. Mr. Bill divines. I suppose, it’s all in how you look at the world.

It was some months however, before  the proverbial penny dropped and I learned what I had missed on that late fall day. A chance encounter, sent me searching through my digital iPhoto files, to discover the feeding phenomenon I had unwittingly photographed. Winter was at long last on the wane and the beach was filled with happy children, enjoying the warmth of an early spring day. It was low tide and the sand was littered with sharp empty clam shells, courtesy of the shore birds’ midday feast. I had stopped to chat with a woman, who was watching her young grandson on his boogie board. (Is is absolutely grand, that you can just stop and have a good chin wag with a Kiwi. They love to talk and you will come away with a new friend and having learned something interesting.)  As he walked through the shallow water, the boy hopped from foot to foot, crying out “ouch, ouch, ouch” with every jump. When I remarked that the shells must be cutting his feet, she answered unconcerned, “oh no, it’s not shells he’s stepping on, that would be the crabs pinching him but they don’t hurt. ” She went on to explain, that stingrays eat the crabs at low tide. The penny dropped! The failed photo was not a failure after all.  I told her of my frustrated attempts to photograph backlit waves. I explained that shadows, which I determined to be seaweed, had spoiled every shot. Nana was indignant. “We do not have seaweed on West End Beach!” she exclaimed. She was of course, right. I have never, ever, seen seaweed on the West End of Ohope Beach or anywhere else, along New Zealand’s favorite beach.

What a relief, that I had not deleted the picture. Although I did not get the photo that I wanted that day, I thought that the dark shapes within the waves, created an interesting design and decided to keep it. As an art student, I learned that there are no mistakes in art, just happy accidents. Keeping the photograph and having the enlightening conversation was indeed fortuitous.

On two occasions, I have been lucky and have seen stingrays in Ohiwa Harbor. Sadly, Mr. Bill has not been as fortunate. Even his discerning eye, would not have tipped the scales in his favor, on those days. The first time, Mr. Bill was in the ‘wrong’ seat in the kayak. The second time involved lunch and Mr. Bill does not eat lunch. Fortunately for me, I was sitting up front and because lunch is my guilty pleasure, I saw the stingrays. On the former sighting, Mr. Bill and I were exploring Ohiwa harbor with Kenny McCracken, of KG Kayaks, when my paddle disturbed a stingray resting on the sandy bottom. Up popped the stingray to my delight but it dove back down in a flash, kicking up a cloud of sand, that obscured Mr. Bill’s view. Poor Mr. Bill, he was understandably disappointed. The latter encounter happened, when I had gone to lunch at Ohiwa Oyster Farm with my friends, Lois and Nick, (Yes that Nick of blog post- “A Fanciful Friendship”) where stingrays join the lunch crowd, enjoying an alfresco meal on Ohiwa Harbor, courtesy of the Seafood Shack. The stingrays come ‘running’ when they see their friend, wade into the water with fresh fish and they flap and swirl around him, as he tosses them their daily treats. It only took three years to train these wild, gentle creatures to come for their free lunch. Patience is a virtue and I reckon both man and fish are amply rewarded.

My advice Dear Readers, if you wish to have a stingray encounter, is to keep your eyes peeled and never skip lunch, unless of course, you are traveling with Mr. Bill. 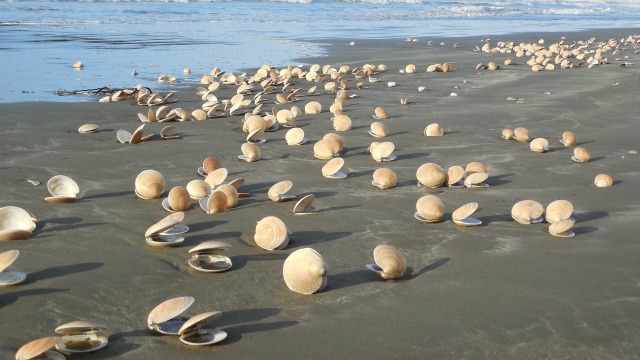 Come and get it!

12 Responses to Hiding in Plain Sight