Mr. Bill and I have settled easily into our Ohope life. We are living on the top floor of Beachpoint Apartments . Just like George and Weezy Jefferson, we have ” moved on up to a deluxe apartment”.Our new place is flat #39, which is on the fourth level but the third floor. How can that be, you may well ask. Well, it’s just one of the many quirky Kiwi things, that amuses and sometimes confuses me. The sign on our floor reads,”LEVEL 4′. However, if you take the lift and press’3′, you will ascend to the fourth floor. There is no number four on the control panel. Very odd indeed. Never does Neverland feel more like an alternate universe, than when doing elevator math- it makes my head spin! To avoid becoming someone, ‘whose elevator doesn’t go to the top’, I take the stairs.

Our first three Beachpoint apartments were all on the second floor (level one). We loved our outlook on Ohope Beach, so close to all the comings and goings. We have seen a pod of Orca whales, swim right along the shore, with a plucky terrier racing alongside them on the sand, barking frantically.Why chase cars when you can chase a whale? We have watched amused, as travelers would stop to use the public toilets, many running as fast and furious, as that whale chasing dog. We have noted the caravans rolling in at night, setting up their barbecues and hanging their laundry to dry on their campers’ warm engine grills. One day, Mr. Bill especially enjoyed the view of the pretty German tourists who didn’t bother with the restrooms, when changing into their bathing suits. Aug Wiedersehen ladies! Yes, life was definitely ‘sweet as’ on the second floor. Why, even taking out the trash was fun for Mr. Bill. Every evening, on his trip down the corridor to the garbage chute, he would shamelessly open the privacy shutters in the Smillie’s patio wall. He would poke his head through the gap, inquire what was for tea and have a chat with his mate, Gavin. Often, if he timed the garbage run right, there would be wine on offer; on those nights, the dishes fell to me, as it took a long time to take out the trash.

Alas, there were no long term rentals available on the second floor this time around; hence the BIG move up to the top level. We fretted that the outlook would not be as exciting on a higher floor. We need not have worried. The views from our level four, third floor eyrie are stunning and expansive. The Bay of Plenty is our front yard. Looking north, we have a bird’s eye view of the plume of steam rising from the volcano’s crater, on White Island (fortunately a safe 30 miles offshore). To the west, we can now see the cliffs towering above West End Beach, which marks the beginning of Ohope Beach. Turning to the east, we can see as far as the East Cape Ranges with the highest peak snow capped in winter. Behind us lies the bush. Our southern neighbors are birds and tree monkeys, a very noisy bunch. The little silver eye birds chirp sweetly, the larger Tui birds sound like R2D2, the nocturnal kid birds screech  and the tree monkeys create such a racket, that I have fled the apartment. Tree monkeys use chain saws.They are landscapers who prune trees. Kiwis have a  nickname for every profession and these climbing arborists, actually advertise themselves as tree monkeys. I cannot see that flying in the states! 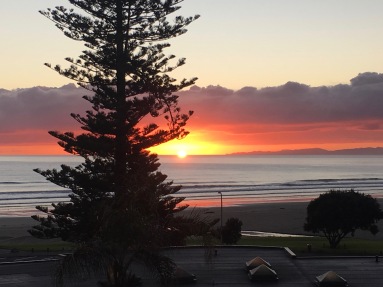 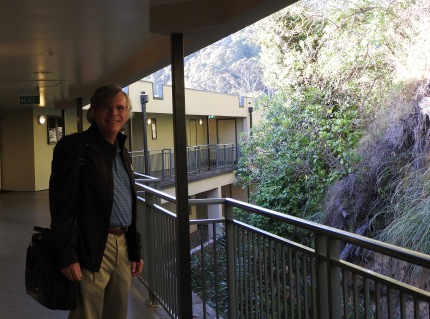 #39 is on the top floor which is also the 4th level- odd numbering here at Beachpoint! Our front door opens onto the hillside behind us.